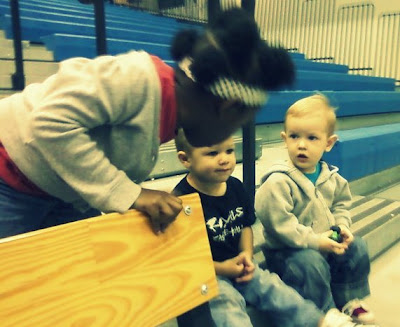 basketball season 2011-2012 is upon us.
the mens team had a scrimmage against the alumni last night(and can i say coach kliewer was looking good in his uniform!).
and both teams have games starting this weekend.
i can already tell there is going to be less basketball watching/more child chasing this year.
these guys (in the picture) are all about a year apart...the athletic directors daughter, the mens coach-his son, and B.
bentley may be the youngest, but he isn't the smallest! he is as tall, if not taller than Trey.
there was a bleacher incident, of falling off. but nothing to serious.
and cars.
must bring more toy cars to play with. driving them along the bleachers is all the rage.
Posted by Anneliese at 10/26/2011