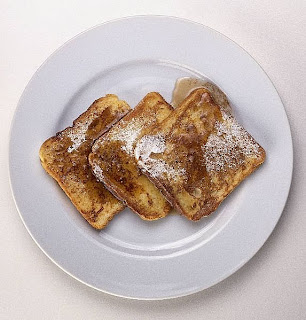 last night.
i made french toast. for the first time in my life! i know, it seems hard to believe to me, too! but it was a hit(when shawn rants & raves about something that is made with bread?! wow. you know it must have had something good going on)! shawn & i were deciding between pancakes or waffles. then he threw the curve ball out there, what about french toast? i didn't know where to begin. stored in the back of my brain was this so i knew there was no need to panic. i had to pick up a few things at the grocery store but since moving to ashland, (even though hy-vee was just as close) i feel like the grocery store isn't as daunting and a trip takes about 7 minutes.
i don't have any pictures to document this momentous event...but i don't know if you'd want to see them. i had 4 skillets going at once (eggs, bacon, sausage, and french toast). it got a little crazy. and a lot messy.

sidenotes: i didn't use french bread. i used whole wheat.
i did use half-n-half.

no way. really?! how awesome. i hope it was good.

ps. i feel privileged to have been a part of your dinner. seriously.

they really were terrific! shawn just couldn't get over it. and that is the highest complement :)

Yummmy! the one time i made french toast, it was soooo messy...but soooo delicious! i am not a recipe follower all the time, so i made my recipe up.
i want shawns broccoli salad...oh who am i kidding, i want to eat shawns perfectly crumbled bacon!

mer---i tried to make the bacon last night & it just looked funny to me! i had to let shawn take over...